Rainbow Reflections - An Anthology of LGBTQ Narratives in Indian Cinema

NOTE: We request a donation price of Rs.200 and above. If ordering within India, this donation price covers shipping cost. If you are outside India and wish to order, please write to us at <partners.kashish@gmail.com>.

An Anthology of LGBTQ Narratives in Indian Cinema

To celebrate the 10th anniversary of KASHISH Mumbai International Queer Film Festival, we have brought out this special magazine that spotlights Indian LGBTQ cinema – a movement that is slowly taking centerstage within the mainstream. Every year about 100 Indian LGBTQ films are being made, which though a small number is significant. But do these films reach the audience? What are the stories they tell? How have the narratives evolved?

With insightful articles by film historians, film critics, and filmmakers themselves from India and Quebec, this magazine is a treasure trove of rich content.

This 64 page magazine with illustrations and photographs promises to be not only a gift that will be treasured for years to come, but an important resource for queer cinema history.

THE PRICE INCLUDES COURIER CHARGE WITHIN INDIA. FOR OVERSEAS SHIPMENT, PLEASE WRITE TO US AT <partners.kashish@gmail.com> 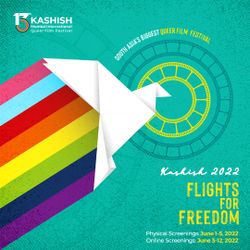