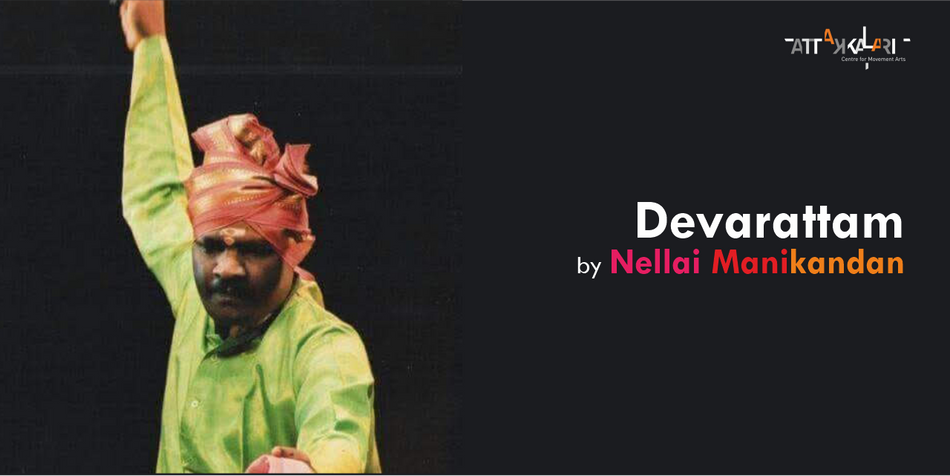 Instamojo - first 5 registrations get 15% off.

Age group & training: 12 years and above, no prior training required

About the intensive
K. Nellai Manikandan is an exponent and teacher of the South Indian art forms of Devarattam, Oyillatam, Karagam,
Thappattam and Silambam. Master Nellai Manikandan is known for implementing contemporary teaching methodologies in order to impart effective training in traditional folk art forms to his students. Forty-four-year old Nellai Manikandan has been learning Devarattam since the age of 8 and his first Guru was his father Shri. Kannan Kumar. He started teaching the art form at the age of 21. Shri. Nellai Manikandan received his Diploma in Folk Art from Tamil Nadu Government Music College, Chennai in 1997. He conducts workshops regularly at various schools, colleges, organisations and theatre groups across India and the world.

He has also choreographed for movies. Shri. K. Nellai Manikandan was bestowed with 'Ustad Bismillah Khan Yuva
Puraskar' by Sangeet Natak Akademi in 2010 for his contribution to the field of Indian folk art forms. These classes are inspirational and will introduce an earthy, sinuous and folk movement quality among participants.

Any further information if you need is here:
https://www.thewayofthemasters.org/devarattam