This is a self-funded project, none of the team members involved in this project have charged a professional fee and we have created this play entirely during the months of lockdown in India.

We seek your support in raising funds that can help us develop this project more.

While this is our eleventh play with roots in Latin America and our fifth full-length play in Spanish, it’s also the first time we’re creating a digital theatre experience for a Spanish speaking audience and our attempt to make it accessible to a wider range of audiences through subtitles in English.

We seek your support in developing the project further by:
- Staging it for more audiences, Indian and international
- Investing in research and development of staging technologies
- Translating and adapting the play into different languages with more cast members
- Converting it into an audio play for those with visual impairments
- Making the project open to schools and institutes as a learning aid in their classroom
- Adapting and staging the play in a physical format once the COVID-19 situation is under control.

You can contribute as little as INR 100 to the project. We will appreciate it deeply.

ABOUT THE PLAY
The text, originally published in 1962, is a black comedy that focuses on a conversation between two severed heads in the aftermath of an execution. The heads belong to Goter, a revolutionary, and Moter, a thief, who were punished to death by hanging for their respective crimes of thinking and stealing. Strangers before death, they make friends under these unusual circumstances, discussing a wide-ranging array of topics such as war, love, identity, belief, and crime.

DIRECTOR'S NOTE
In early 2020, we were approached by the Embassy of El Salvador to stage this play in Delhi, to bring visibility Salvadorean literature, traditions and culture. Unfortunately, the COVID-19 pandemic and ensuing lockdown made us abandon the original plan to stage the production in a real, physical setting. Given the nature of the text’s and its characters, as well as my own experiments with digital theatre, multimedia and augmented storytelling, I decided to adapt the play and direct it as a live digital performance with performers using the popular video calling tool Skype. The play was then designed using OBS (Open Broadcast Studio) and will be streamed live. The fact that the conversation between these two severed heads can be replicated almost perfectly over a two-person video screen, the fade-in and fade-out for character transitions can be controlled using the brightness of our monitors and finally, being able to switch our video background to place the performers in a dilapidated 19th-century town plaza (or anywhere else for that matter) makes the performance highly compelling to watch, even if it's online. We decided not to go ahead with a simple recording of the performance which, in hindsight, would perhaps have been lesser of a challenge than a live performance over the internet. But that’s perhaps why I (and countless other theatre-makers across the world) believe we have to continuously investigate the process of making theatre in this new normal. It’ll be long before audiences come back to physical spaces and in that time, we have to negotiate this online space to meet the needs of an online audience yet respect the ‘live’ nature of a performance.

ABOUT THE GROUP
Kaivalya Plays is a Delhi-based collective of independent theatre practitioners led by Varoon P. Anand as its Artistic Director and Gaurav Singh Nijjer as Production Manager. Since 2012, Kaivalya Plays has brought works by many Latin American authors to the Indian stage and has frequently collaborated with institutions like Instituto Cervantes Nueva Delhi and the Embassies of Argentina, Spain and Ecuador in India. They have adapted and staged texts by Julio Cortazar (Goodbye Robinson), Jorge Luis Borges (El Aleph, Blue Tigers, The Sand Book, Funes the Memorious), Pablo Palacio (A Man Kicked To Death) and Griselda Gambaro (Say Yes). Their recent work in the online space has been featured in India Today, The Citizen, StoriesAsia while their previous projects have been mentioned in The Hindu, Indian Express, The Wire, Financial Express and India Today, among others. 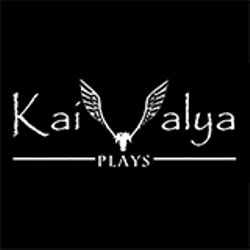